Data from the HOBO® Sensors 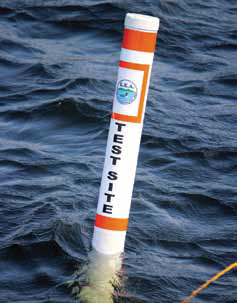 To get a better idea of temperature patterns in Moose Pond, LEA began monitoring the temperature using in-water data loggers in 2013.

The loggers, also known as HOBO® sensors, are small, digital temperature sensors that have been programmed to record readings every ﬁfteen minutes at various depths.

At the deepest section of each of the pond’s three basins, you’ll see an upright buoy—this is the sensor, which stores data until LEA retrieves it.

The measurements allow researchers to examine a temperature proﬁle of the pond and infer its effect on diverse characteristics such as stratiﬁcation (lake layering), ecology, habitat and nutrient loading. They can see how it ﬂuctuates over time due to weather.

LEA’s Assistant Director Colin Holme says, “With the new HOBO sensors we can see when and how stratiﬁcation forms and breaks down—it can also sometimes partially break down, such as when winds dig down deep enough to grab some of the cold, high nutrient water and bring it to the surface.”

Comparing temperature data over a number of years allows LEA to make observations about climate change in our region. So what did the sensors tell LEA and MPA about Moose Pond?

Stratiﬁcation deepened in all basins in mid-September, signaling the beginning of fall turnover—the time when the upper waters that had been warmed by summer’s sun cool down. Complete mixing, or turnover, occurred in the north basin on September 12th, the middle basin on November 2nd, and in the south basin on October 22nd.

If you are wondering how Moose Pond compared to other lakes in the area—in 2014, LEA reports that most of the lakes recorded their maximum temperature on July 23rd. In future years we’ll be able to see temperature trends.